Get me outta here!

Bath Salts, LPQ-79, Miami Man Eats Face and the Zombie Virus are the new weapons of mass destruction. Over the past few weeks we’ve been witness to numerous cannibalistic behaviors from people across the country, triggering thoughts that there just might be a “Zombie Apocalypse.” 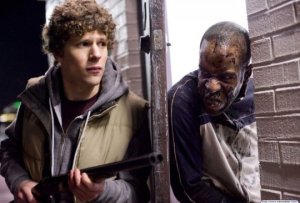 LIST: The Walking Dead! 10 Drugs That Will Turn You Into A Zombie

First came Miami and the case of Rudy Eugene, the 30-year-old man, allegedly high on LSD, who was shot and killed by police after they discovered he was eating the face and brains of a 65-year-old homeless man.

LIST: Things To Know About The Face-Chewing Naked Man Case

In another case, a Maryland college student was arrested for killing his roommate after he told police he ate the victim’s heart and part of his brain after he died.

In San Antonio, a mother beheaded her infant son on orders from “the devil” and reportedly ate a portion of his brain and three of his toes.

In New Jersey, a man stabbed himself 50 times and threw bits of his own intestines at police, with witnesses saying he acted like a zombie.

These incidents are horrifying and shouldn’t be made light of considering that they involve real people and places, but the nature of these crimes continue to fuel the theory that it might be a zombie apocalypse brewing!

The thing is, the cannibal stories we’ve been reading about are the definition of art imitating life. From Mary Shelley’s 1818 publication of Frankenstein, to AMC’s hit series The Walking Dead, we are witnessing first hand what it’s like to live in a zombie society, so to speak.

The script is written, people are behaving like zombies and the government is denying that there’s a zombie conspiracy.

On Friday, Center of Disease Control spokesman David Daigle said in an email:

“CDC does not know of a virus or condition that would reanimate the dead…or one that would present zombie-like symptoms.”

Does not know of a virus or condition that would reanimate the dead? You’d think a spokesman for the CDC would have more of an affirmation about the walking dead and have a clear stance on the matter!

After all, zombies look like us, but they’re the undead who slowly rot and survive by feasting on the living, while at the same time turning others into zombies.

With the CDC’s statements and the ongoing cannibalistic stories popping up in the news, maybe there is a “Zombie Apocalypse” coming to a town near you. If there is, here are the signs…

Marijuana T-shirt Hangin With My Buds

Error: Twitter did not respond. Please wait a few minutes and refresh this page.

Where To Buy Herbal Incense